The ballot in San Francisco for the November vote will include a measure to start restoration of the Hetch Hetchy Valley of Yosemite National Park by draining the reservoir filled behind the O’Shaughnessy dam. This is incredible to think about and I was surprised to even hear about it.

The drama that played out in the early 1900s between the thirsty and earthquake and fire ravaged San Francisco and the environmentalists led by John Muir and the young Sierra Club seemed to have a finality about it once it was decided and the valley filled. It was a great tragedy for our public lands and broke Muir’s heart. The Hetch Hetchy Valley was home to a large population of wildlife, forests, flowery meadows, waterfalls, and the Tuolumne River. Once the valley was filled by the reservoir, there was no going back, right? No doubt there is immense damage and the animals are obviously mostly gone, the trees wiped out, replaced with the countless gallons of barren water desert right up to the steep granite valley walls.

END_OF_DOCUMENT_TOKEN_TO_BE_REPLACED

The forest fires in Colorado and Utah are all over the news right now and could affect plans for people wanting to get out into the mountains and forests and do some hiking or backpacking. A friend living in CO posted on facebook that his state was on fire. I’ll try to shed some light on what conditions are like for those curious. In general I’d think most plans will be fine (these are large states) but there is possibility of haze in the air from the smoke even if your planned hiking area isn’t directly affected by the fires. My best advice is to inform yourself. Do research online. They are pretty good at updating info on this kind of thing now. And if you’re going out near one of these areas, you really need to call the ranger’s office and ask about conditions and any restrictions in effect like for campfires.

Google has a very nice updated mash-up map that pulls data from some of these sources and puts it in a zoomable Google Map that includes fire perimeter overlays and others you can add like webcams available and satellite imagery: http://google.org/crisismap/2012_us_wildfires

END_OF_DOCUMENT_TOKEN_TO_BE_REPLACED

A camp stove is behind the huge Colorado wildfires in the Roosevelt National Forest in the Fort Collins area that started May 14th. It sounds like the man whose stove started it tried to stamp it out but then had to flee as it got out of hand. He later reported it to the police (there is no cell service in the area he was camping). I have to say good for him for letting the authorities know. Despite him starting the fire, that is an honorable dude.

Camp stoves are safer, but there is still danger of causing a wildfire. I guess all it takes is for one dry pine tree to catch on since those can burn incredibly fast. So you have to be careful even when using a stove, and really careful actually building a campfire, especially with dry forest duff around. You might be somewhat helpless to stop it without water or anything around. I guess smothering it quickly might be your best shot.

Tom and I can always bring up the campfire we had on our first backpacking trip that restarted itself after we had gone to bed! I remember it got really bright suddenly and startled us. It wasn’t just burning, somehow it really flared up high. Good thing it was in a fire pit. And it helped that we were next to a lake.

There are also stories of fires being put out and traveling underground through layers of forest duff and flaring up somewhere else. We seriously douse fires and dig them out everytime.

A couple of young guys set up some nasty booby traps on a popular trail in Provo Canyon, Utah complete with a kind of bait that definitely were designed to hurt people. Traps are intriguing and maybe they thought it could be fun to try and set up traps like you see in movies or something but that’s pretty scary. Thankfully the first person to run into them was able to recognize what they were otherwise it could have been a much worse story.

I’ll make you a deal.  If you are careful not to cause harm to the natural places you visit so that I may enjoy them just as much when I visit, I’ll do the same. That means no cutting switchbacks, especially on heavily used trails.

Hiking off-trail is fine where allowed and it is allowed quite often. But it does damage when done repeatedly in high traffic areas. This damage can easily lead to erosion since the trail builders didn’t build in durability features like water bars like they do on the real trail. Use common sense and walk on the trail if there is one close enough to where you want to go.

Trail builders and maintainers do us hikers a great service. Don’t ruin their work and cause trail erosion for the rest of us. Practice good etiquette and don’t cut.

Here is a good Forest Service resource if you want to understand a little more about what the trail builders are thinking and what goes into switchbacks – Trail Construction and Maintenance Notebook, p. 12 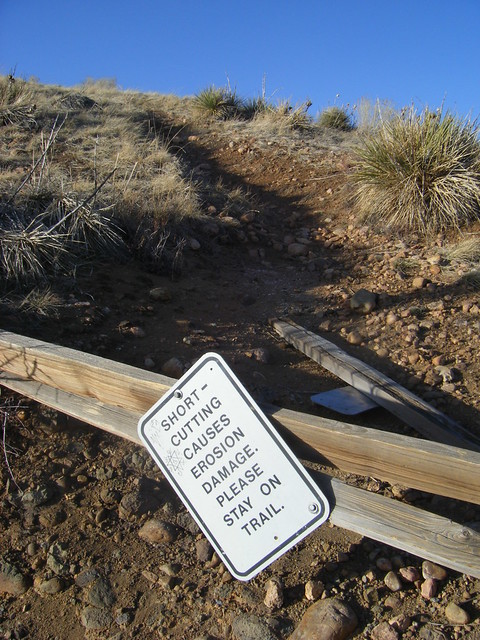 In our 2005 backpacking trip, we began and ended our four day loop in spectacular Mineral King Valley in Sequoia National Park. It is an incredible setting surrounded by 12,000 ft mountains. The infamous Mineral King road plops you right into the thick of it.

We finished out our trail on the road at Atwell Mill with our car a few miles away at the Sawtooth trailhead. Luckily a friendly driver in a pickup truck came along and offered to haul us down the road a bit and that was music to our ears. It turned out he and a friend were heading to his cabin, one of the private cabins I briefly read about before the trip, and he even offered us beer. It was another offer we certainly couldn’t turn down. We followed them to the cabin and hung out on the small deck for a while before we left to make the long drive back to LA.

I have to admit, when I first learned there were private cabins in the middle of a National Park, and which had always been federal land, I thought it was a bit strange. END_OF_DOCUMENT_TOKEN_TO_BE_REPLACED

Now eVent  Fabric is available again at REI.  The (updated) men’s Shuksan Jacket and Pants, the women’s Kulshan Jacket and Pants, and the OXT Airflyte Running Jacket, all with eVent Fabric are prominently on the front page of REI.com for the Fall season.  This is good to see.

I also found a PDF of a study by the US Army that shows eVent Fabric is superior.

What happened to REI’s Shuksan waterproof jacket and eVent Fabric?  The REI Shuksan jacket came out last year (2008) and it featured the Gore-Tex killer, eVent Fabric, and REI was pushing that heavily.   END_OF_DOCUMENT_TOKEN_TO_BE_REPLACED