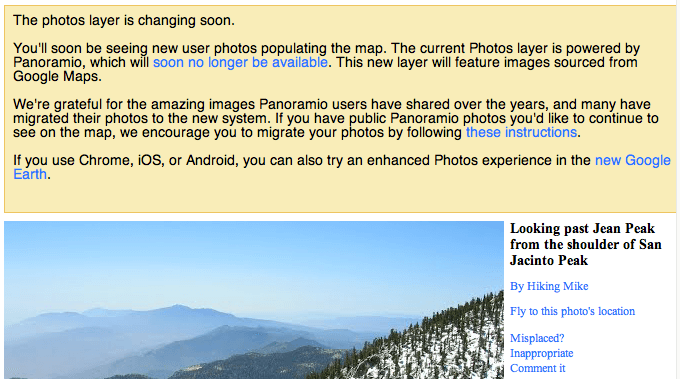 The shuttering of geo-located photo sharing site Panoramio continues. It has survived as a faint shell of its former self in read-only mode for a while now, since November 2016. But it looks like the end is finally near. If you’re a Google Earth user, you may not even know really what Panoramio is, but this will likely affect your experience.

If you view a geo-located photo in Google Earth now, there is a good chance you’ll see the following message: “The photos layer is changing soon.”

The photos that you can view in Google Earth of whatever neat place on the globe you are visiting have largely come from Panoramio for many years. It was a community of photo sharing enthusiasts who uploaded their photos and tagged locations, with consistent moderating. One result over time was a large collection of quality location-relevant shots pinned to the map and viewable in Panoramio, Google Earth, and Google Maps. Panoramio users (including me) gained a bit of satisfaction seeing their photos fill in the blank spots on the map and register views. And of course people using Google Earth and Google Maps gained the ability to see these photos, making those tools more useful and fun.

According to the announcement, those photos that have not been migrated to Google Maps will soon no longer appear. Those photos that were migrated should appear in the photo layer of Earth/Maps. Migration requires a Panoramio user to have linked their Panoramio account with a Google+ enabled Google account. We really don’t have any way of knowing what percentage of users did this. Some will want their mapped photos to live on, while others will want to just leave after being turned off by Panoramio’s closing.

We will have to wait and see what that change will look like. I had expected some loss of quality because Panoramio really had a ton of good photos from people who considered themselves photographers (alongside a few amateurs like me). Maps will have a lot more cellphone photos. I think moderating them will be key. I’m not exactly sure, but I think Google hired moderators that reviewed Panoramio photos for inclusion to Google Earth. In the new setup, Google may be counting on having enough users that care about relevant photos on the map to keep the selfies and food photos from overwhelming the geographically useful photos.

I do see a lot of good photos from Maps now. There are a lot more 360 degree photospheres uploaded to Maps, and I wonder if those will appear in Earth. One major difference is that when contributing to Maps, you are required to link your photo to a marked point of interest. I believe this requirement will remove a lot of usefulness of the photos layer for undeveloped areas, parks, etc. because there is often no matching point of interest. As a result, I can’t upload many of the photos that I had with Panoramio so that’s why this is a part of my wishlist for Google Maps. The coverage around the world of the photos layer will also change with the different user-base.

Updated info in newer posts below: