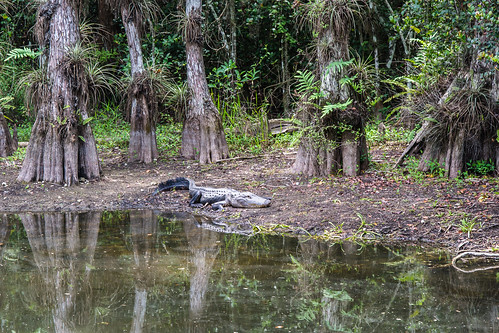 My first thoughts when seeing this headline were:

But it turns out the mineral rights are currently owned by a family that is pursuing oil exploration… or at least they may own them. The mineral right ownership seems to be in dispute because the original land deal that created Big Cypress National Preserve may have specified that the mineral rights were included. I haven’t read specifics on why that isn’t clear.

Ok, so this is good, and I generally trust in and agree with whatever these conservation groups, including the Natural Resources Defense Council and the Sierra Club, favor. Plus, the State of Florida has a very large role to play here and I am heartened to know they are making some positive decisions. Humanity really screwed up the Everglades, and the continuing long-term restoration efforts are extremely important in my opinion. So we need to prevent drilling for oil and any other large scale disturbances. The Everglades ecosystem is very unique in large part due to its interconnected hydrological system and sheet flow. It is a treasure we should protect.

I will copy a quote from their letter below:

Big Cypress National Preserve plays an important role in the Greater Everglades. It comprises 720,567 acres of a water-dependent ecosystem and is the western extension of the Everglades hydrologic system. Water flows on the surface of the Preserve in marshes and sloughs and below ground through porous substrate in aquifers. Big Cypress Swamp serves as a significant aquifer recharge area to aquifers that provide drinking water to nearby communities. Notably, the Big Cypress basin provides over 40 percent of the water flowing into Everglades National Park and is a vast hydrologic network—among the least altered remaining in South Florida. The Big Cypress National Preserve also contributes to Florida’s tourism industry and related jobs. More than a million people visited Big Cypress annually from 2013 to 2016.3 Conversely, Florida oil production constitutes only a small share of Florida’s gross domestic product – less than 0.2 percent.

From an environmental standpoint, this is a nightmare location for oil drilling. It’s an extremely important part of the Everglades ecosystem being upstream of it. Drilling has the potential to damage 4 aquifers! And humans actually use one of those aquifers for responsible disposal of waste water from south Florida so it could have a direct negative effect on nearby communities.

The more I read, the more I think the Collier family is purposely threatening environmental risk and potentially very bad environmental destruction in a very important area with huge ramifications just to get a bigger payout from the government. They want to harm either the environment or taxpayers. So it sounds like they are terrible people.

Here is a good read on the history of bad land deals and potentially very bad land deals almost made by the federal government in purchasing Big Cypress land and mineral rights from the Collier family:
“Rip-Off in Big Cypress: How the Department of the Interior attempted to orchestrate one of the worst land deals in history”